My first year in Taiwan made me a victim of human trafficking. I am thankful that my story is not anywhere near as terrible as others. But, I understand the damage that human trafficking does to people, crippling their lives for years. After ten years, I’m still at a disadvantage because Taiwan did not protect my rights as a foreigner.

Foreigners have limited rights when in another country. That is good, in a way. But, it puts foreigners at a disadvantage, making foreigners easy for dishonest people to take advantage of foreigners. Employers know about these disadvantages and game the system to turn foreigners into partial slaves. That happened to me. Though it was very mild, I am a victim of human trafficking.

But, then I discovered something else even more shocking. I’ll explain that after I tell my story.

In Taiwan, I was the foreigner. My first two bosses tried to control me by seizing my legally-required paperwork; my second boss succeeded.  · · · → Saturday morning I awoke at 4:00 am to my apartment shaking. I had a feeling nothing would fall. So, I went back to sleep. I was right, about my own apartment, that was. In fact, I was right about most people who also had woken up.

Honestly, and I’m somewhat ashamed to confess, though it is the truth, I enjoy being in earthquakes. I don’t like them. I get a thrill being in them. I don’t like what they do to people. I certainly don’t like their destruction nor the massive dust storms that follow the buildings they topple. But I have been through enough that I know when I am not in danger; and I secretly kind of enjoy them once I know that. They bring a thrill. Perhaps this is my way of dealing with forces beyond my control. The thrill is an ugly reality about earthquakes.

I posted a new petition on Change.org to raise awareness of the deep problems with Taiwan’s “black box” negotiations with China. Congress and the American public need to know.

You can view the petition here. It is very easy to sign it: 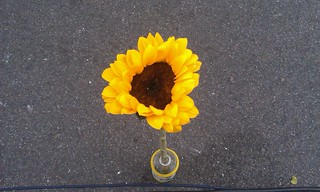 The sun sets on several thousand gathered in Taipei. Police stand guard with riot shields and batons blocking roads and entrances. Streets overflow with students—some standing, most sitting on cardboard, Mylar heat blankets, or interlocking foam pads. Tents and booths line walkways. Traditional Taiwanese food vendors sit at the outskirts. Projection screens and stages can be found at the corner of every block, each with a different guest speaker. Sweepers patrol, armed with brooms and dustpans. The scene is clean. No one litters. Everyone is a volunteer but the police. Sunflowers and yellow banners are everywhere. 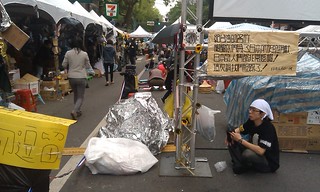 This is a movement unlike anything I’ve seen. Anyone who has personally encountered a head of Sate understands the term “electricity”. If you’re standing outside the White House, for instance, not even paying attention, you may suddenly feel an enormous “jolt” of emotional energy, even with no noise or activity.  · · · →