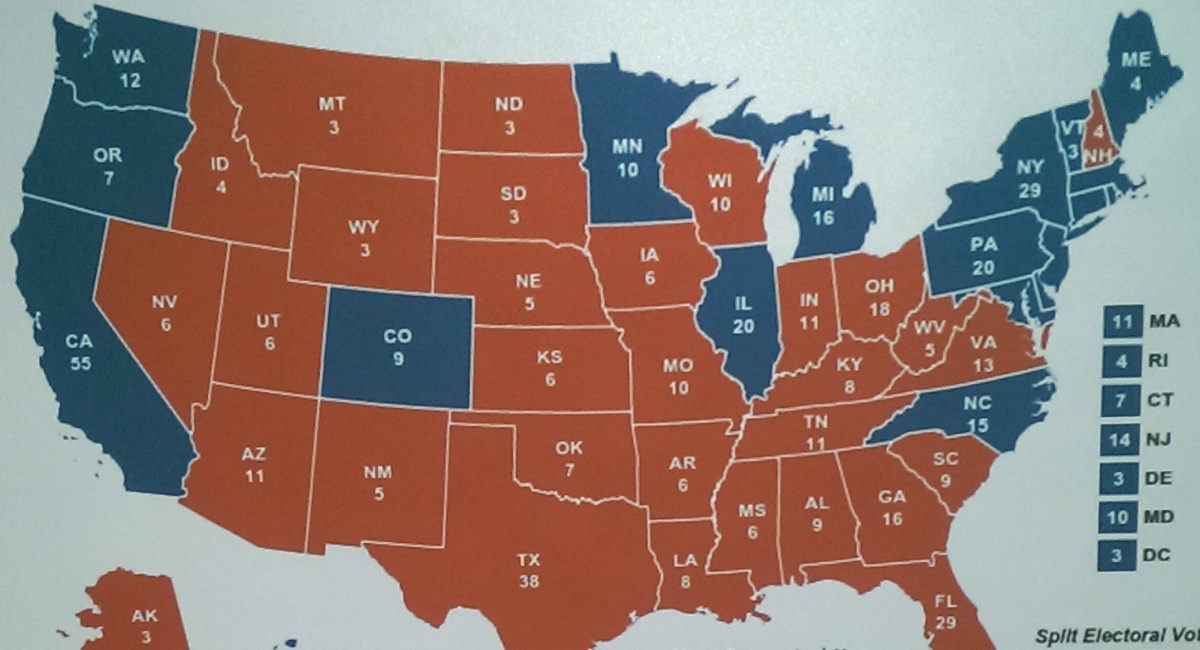 Call it “Fantasy November”, without the illegal gambling. I’m predicting the 2016 November map. Here’s why…

Disclosure and disclaimer: This assumes a Trump v Clinton ticket with no strong third party. If not, all bets are off. I think this is most likely from what I can see. I would be ecstatic if Carson won the nomination, however I don’t see a scenario where it happens. I see Carson staying strong and Trump preferring him for VP, offering Palin if Carson declines. I’m not guessing a “Carson v Hillary” scenario because I only foresee what I think a likely reality, even if it is not the reality I prefer. And, I’m keeping the can of worms sealed on what events could upset this most foreseeable scenario.

Trump is a viable candidate against Hillary for three reasons:

1. Reagan was divorced and a former Democrat; Trump changing his mind over decades makes him look more like Reagan. “Flip-flop” myth debunked.

2. After elected, politicians all do the same thing: They continue what they did in the past. Cruz would have “stuff happen he didn’t know about”, benefit from dirty tricks, issue false alarms and “Violations” thereby scaring-up support (like W did), and get RINOs like Paul Ryan in more positions of power by opposing their opponents like he did with Boehner. Rubio, the chameleon, will sell-out more to crony capitalism and his Harvard buddies. Trump… He will continue to build things, fire and hire, review and approve, cut bad spending, and get profitable. There won’t be any $25,000 hammers tolerated with a real estate mogul as president. Once elected, people don’t change, and we know who Trump is.

3. Sanders is stirring up pro-growth, anti-establishment support. His listeners haven’t listened to Trump because they refuse to, as bubbled Democrats. There has not been a true test of a general election lineup accurate enough to poll it. In general election debates, Sanders supporters will hear Trump for the first time, particularly in response to Hillary, and they will think Trump sounds like Sanders. It won’t be many, but it will be enough to win the general election for Trump.

To the States I chose…

Most states will go Republican because that is the trend.

I could be wrong about Minnesota going blue, but the only non-swing-State I’m flipping is New Mexico.

New Mexico is considered Democratic, but I predict it Republican because of border issues and opposition to Obamnesty.

Colorado will go against Trump over marijuana.

Iowa loved Trump and kept him a strong second place for most of his run before the primaries. Cruz, Carson, and Rubio supporters should mostly support Trump, being enough to defeat the Democrats, who couldn’t make up their minds. Hillary won a vote by a coin toss—that and one more precinct would have tied Sanders and Clinton. Iowan Democrats need a strong caucus in order to predict the general election; this one was weak. Of Republican presidents in recent decades, only W won the Hawkeye Cauci. Republican victors usually lose Iowa because Iowans are idealists, like W was, who Cruz resembles in style and now Iowa delegates. The nation won’t accept another W. Cruz played “Rovian dirty tricks”; he may not even keep his seat in the Senate. Cool-hand Carson could be the best contrast to Cruz, showing Cruz’s character for what it truly is. Iowans may already have buyers remorse. Iowa, including a small chunk of Sanders supporters, will choose Trump in the general election. (See former Iowa polls below.)

North Carolina I put Republican because that’s the trend in States, especially the South. The current governor is the first Republican in 20 years. North Carolina is no exception to the trend, which is more than can be said for Pennsylvania.

Pennsylvania I predict Democratic because of their Democratic governor every bit as much as the turn-pike. A state with few freeway exits rarely likes change. Hopefully Pennsylvanians will be more open-minded after a few years of benefiting from the president they opposed, not to mention the fact that Trump will probably help Pennsylvania build more turnpike exits, which they might like once they try them. IMHO, few places to get off the freeway is a bad idea anyway. I think Pennsylvanians will continue to do what is bad for themselves, refuse to exit, and go for Hillary. I would like them to prove me wrong and I’ll be pleasantly surprised if they do—very pleasantly surprised.

Virginia is where Snowden has been charged because that’s where prosecutors know they can win. Trump wants to prosecute Snowden. Like-minded Virginians will support Trump over Snowden and related issues.

Florida will choose Trump because he took out Jeb. The Bush family has a history of spreading the disease of buyer’s remorse. Floridians will be thankful. And, many Hispanics love Trump, of which Florida has many.

Ohio is thankful to Kasich and his economic policies, many of which Trump will continue. Kasich is not electable as president, though Ohio is currently in red-mode. As goes Ohio, so goes the nation, the only exception being W, which won’t happen again.

New Hampshire… Cruz’s little game in Iowa ended him; New Hampshire is next. Trump is strong and will only get stronger in New Hampshire. And New Hampshire voters are a good litmus test for Republicans in the general election. (See NH polls below)

I would like to give Minnesotans credit to possibly swing. I’m just being careful about changing too many non-swing States. I would love to be pleasantly surprised. But, the rest is the way it is and probably the way it will be.

My own State, Michigan, still hasn’t figured out that Democrats destroyed Detroit. Like Pennsylvanians, Michiganians haven’t lived up to their great potential. I hope times change hearts. I’m thinking of moving to Arizona.

My November prediction. Thanks 270towin.com